We are proud to celebrate the work of our Art Students as the Fine Art Degree and Open Studio Exhibition continues at Taigh Chearsabhagh.

In this blog NC in Art and Design student Emily Dodd shares her experience as a student in Uist and chose to write about one of the modules she has been studying.

Emily Dodd has an MSc in Communicating science and a degree in Geophysical Sciences and decade of experience writing and delivering museum education programmes.  She is the author of over twenty fiction and nonfiction books and a screenwriter for CBeebies.

Above is an image of me, standing next to my work in a real-life art gallery. I never knew this was possible and with work I never could have imaged I’d make. It’s an art-science-crossover of a mixed media piece that’s based on the liminal zone.

This is some of the work I’ve made over the last year and this has to be the work that surprised me most – I had no idea it was coming. A bit like my move to North Uist to study art and design. The mixed media module began with a field trip to Clachan sands…

As I walked and looked, I thought about the edges. The meetings of surfaces. The joins between things. The liminal zone. I wrote observations as I walked:

I came upon something that surprised me. It was so ordinary but so very beautiful: 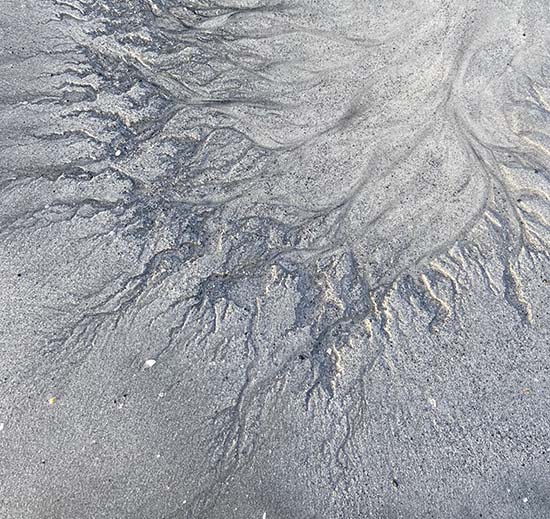 The shapes carved into the sand looked like arial photos of fluvial alluvial fans I’d recently been working with. I’d been writing a children’s book on Geology, and I’d requested the ‘Geology in Space’ spread include arial photos of river channels on Earth and on Mars – to show the visual evidence of past water shaping the land on Mars. The shapes here looked just the same, only the water was still present, and the features were carved in miniature.

I thought about water and the water cycle and how all life on earth is sustained by water. I’d been writing chapters for a book called ‘Water Cycles’ earlier that year so that might be why all of the science was floating about in my head. Whatever it was, I thought some more about the extraordinary nature of water.

It’s the only substance on our planet to be found naturally in three forms – solid, liquid and gas. It’s everywhere too, around and within. The planet’s surface is more than two thirds water. Our bodies are two thirds water. Every cell inside us only works because of the water moving in and out of it - all the time.

And I thought about the way water is powerful. It changes our landscape. Glaciers gouge out valleys. Rivers carry rocks that bash and break each other down. Mountains get turned into tiny grains of sand, all by water. There the mountains were in the sand I was walking on. And I thought about Uist and how it is so vulnerable to climate change as sea levels rise.

I drew the water channels and the tiny bits of dark dusty rock particles that line them. Back in the studio I wanted to recreate those channels. I used lines, and dots and seaweed and string: 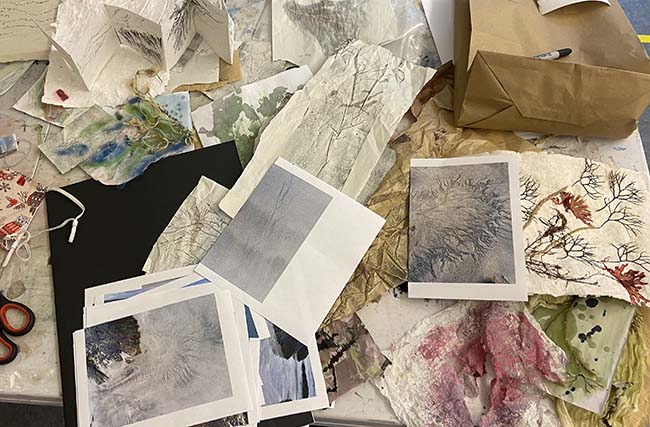 When I was mono printing, a happy accident created something wonderful – I rolled an inky roller over some newsprint and a river channel carved its way into my paper – I felt so excited!

Further attempts to recreate helped me to realise how wonderful that accident truly was. The river channels only appear when the ink is almost done. And when the paper is sufficiently trapped by ink below it. The paper grain has to be at right angles to the roller motion. The motion has to be at the perfect speed. It only works on brown newsprint not white; the brown is the thinner newsprint paper.

So, I worked and I learned the rules of that which started as an accident. And the river channels appeared again and again, rollered in a joyful frenzy of blue and black ink.

I played with direction and scrunching to make more angular or more subtle channels. And I started to join sections I’d printed to make layered landscapes.

I choose blue, to represent water within my work. The water in the channels and the water flowing through life itself. I stitched blue embroidery lines of marram grass into my pieces. The grass is part of the rare machair habitat we have on Uist. 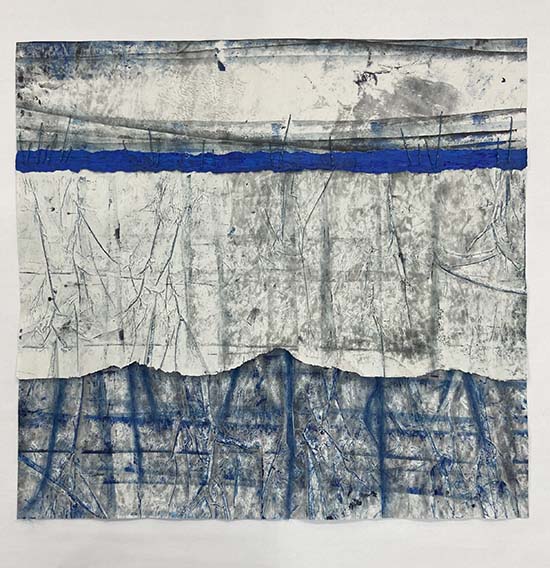 The first final piece was that day at Clachan sands. The near flat horizon line, sits above the machair. The lines of marram grass. The river channels, coming down from the machair, carving their way through the sand and the sea where the freshwater meets salt. I ripped a horizon line of mountains, a nod to the sand and what it once was. And the seawater lines met the mountains like rock from subduction zones. The rock rises up as seawater seeps down a plate boundary and causes decompression melting.

This first piece took me ages! I was so nervous about every stitch and line. I was scared I’d ruin it. The newsprint is so delicate too. As I sewed I thought about the machair stitches being made from cotton – plants made from spun plant fibres. I felted blue lines into the paper - these soft Marino wool lines represented water and their material, animal wool, represented another element of the life cycle. The rock cycle, water cycle and life cycle are all represented. And I realised the paper itself is wood, made from trees, the things that sustain all life by supplying the oxygen we need.

As I ripped the paper I thought of the glaciers ripping off rock. I also had the theme tune to  ‘Skippy the Bush Kangaroo’ singing in my head but with ‘Rippy’ instead of skippy. It was a children’s TV series written when I was growing up.

I added a navy-blue painted line to represents the line of vulnerability to climate change – the machair being on the point of fragility, almost gone but not yet, safe until sea level rises. 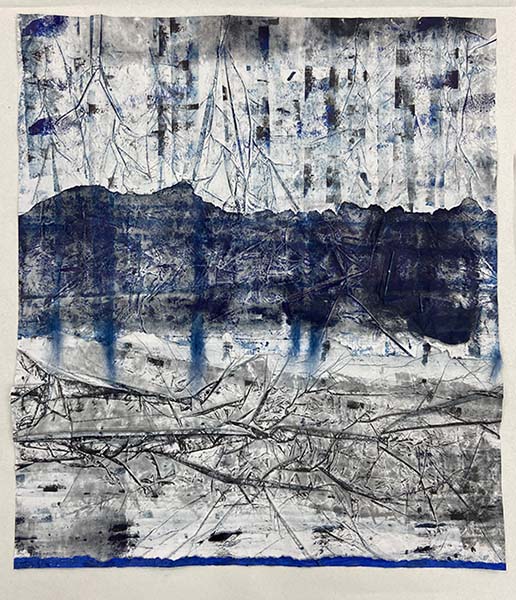 My next piece was more fun because I felt under less pressure. It felt more playful – I’d relaxed because it didn’t need to work. I’d already made a final piece. It’s called northern lights and I think it’s my favourite.

The top layer represents sky. The river channels are reversed in the sky to represent photons of light, streaming down.

The blue light continues through the land. Our planet is made from an exploded star and all matter depends on the speed of light, so I wanted the light to penetrate through every layer.

The mountains in the second layer down are darker. Much more strongly representing rock and the layer below is sand with river channels in it.

I ripped a second mountain horizon into the join between rock and sand and lined up the black squares below. They represent the rock hardened in the core of granite mountains, this magma cools and hardens beneath the surface.

Underwater, Inside the Earth. 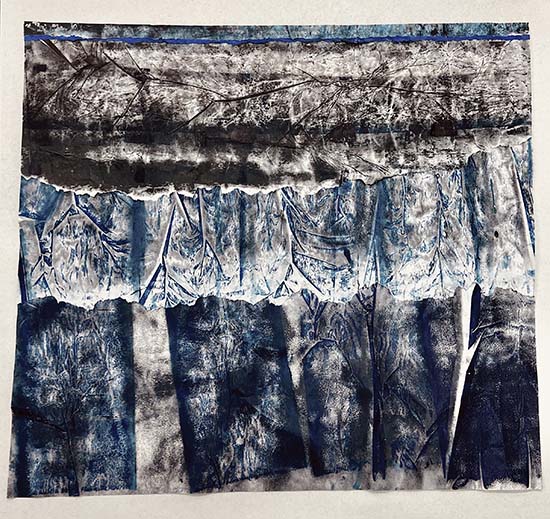 I tried a more linear blocked print. I frayed the mountain layers to make them more jagged and I started with the sea level line and made a section of sand meeting it but I used much darker prints to represent underground below that.

The blue layers are more like rock fractures that fill with minerals as crystals cool deep underground. The lines are like the lines of quarts we see on surface rocks. Or like tree roots creeping beneath the surface.

And deep below that are the more layers of rock and movement and heat. 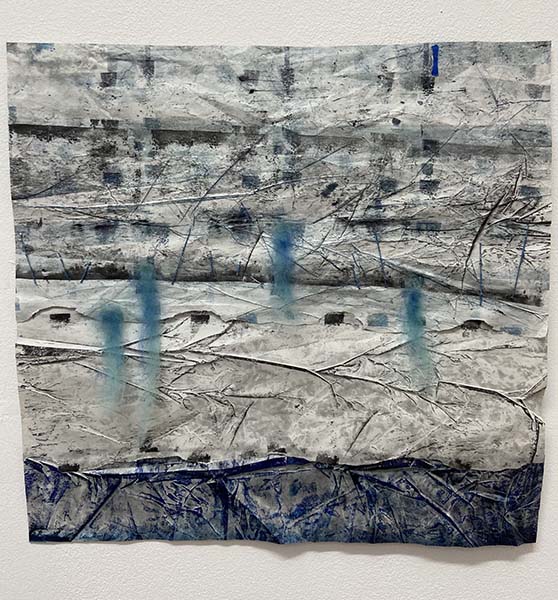 My final piece is a zoom out. It’s called Gravity and Magnetism. It was done the next day. The only one with a lighter blue felt. More squares. Photons of light. Blocks of rock. There are horizon lines, mountains and river channels. And dark lava flows at the bottom. It’s all the cycles in one. Life cycle, rock cycle, water cycles and forces too – gravity causes the river channels to form as the water flows downhill. The light photos are attracted by the earth magnetic field lines.

It all makes me think of some John Muir writing I adore:

Everything is flowing going somewhere, animals and so-called lifeless rocks as well as water. Thus the snow flows fast or slow in grand beauty- making glaciers and avalanches; the air in majestic floods carrying minerals, plant leaves, seeds, spores, with streams of music and fragrance; water streams carrying rock... While the stars go streaming through space pulsed on and on forever like blood globules in Nature's warm heart.

When we contemplate the whole globe as one great dewdrop, striped and dotted with continents and islands, flying through space with other stars all singing and shining together as one, the whole universe appears as an infinite storm of beauty.

This and more of Emily’s work will be on display and for sale in open studio show at Taigh Chearsabhagh throughout June. You can also view the Fine Art Degree Show Catalogue here - Art - 2022 Degree Show (uhi.ac.uk) -  and find out more about studying Art at UHI Outer Hebrides.

Emily has recently been awarded a UHI student development fund to attend a five day private tuition marble carving workshop at the Edinburgh Sculpture Workshop after she produced some excellent plaster sculptures during the course and applied for the award with support of her tutor, Anne Mackenzie. 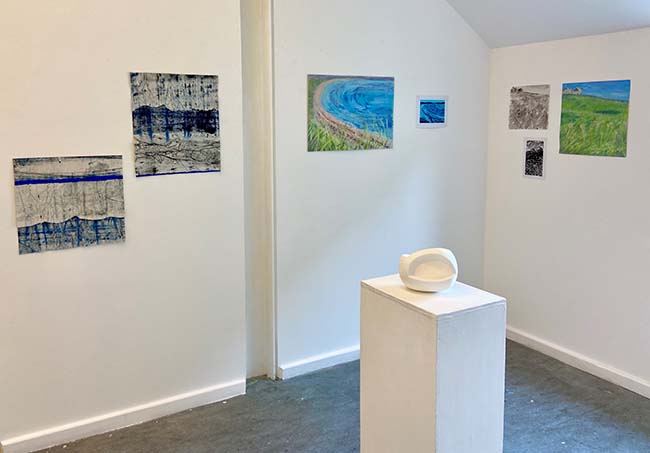 And her short animation created during the course, ‘The Artisan Otter’, will be touring the Hebrides with the Screen Machine in August (showing before the big screen movie) and it will also premiere at An Lanntair in June and at Taigh chearsabhagh, as part of the touring exhibition for the first RSPB Outer Hebridies Wildlife festival.