Singer Songwriter and recent MA Music and the Environment student Zac Scott shares his Environment as a student at UHI Outer Hebrides and how his course work supported work with mentoring programme SAMPLE.


My name is Zac Scott and I am a 28 year old singer-songwriter based in Glasgow, Scotland. I am a freelance musician who works in the community with different organisations. I mostly work with Paragon Music and coordinate the SAMPLE Mentoring Programme for young people aged 14-18 who want to explore what a career in the arts after school might be. I was a Music and the Environment Student from late 2020 - early 2022 and want to share my experiences on the programme.

In March 2020, I lived on Nithsdale Drive in Glasgow. This large 2 bed flat at the crossroads was busy with car garages, coffee shops, estate agents, dodgy newsagents, ambulance sirens and elaborate exhausts affixed to shabby Citroens. It was where my partner and our flatmate lived for the past year and a half. It was a landing site more than a home, each of us freelancing in the city on a variety of unique creative projects and ventures – returning only to eat, sleep and then leave the following day back to the next gig. It was in all senses of the word, a noisy, seldom still site. Questions were noisy and about the next thing rather than the moment – what time is the bus? What are we having for dinner? Have you got your spare strings? Have you got enough money for the bus?

Though, also in March 2020 the first lockdown sprung upon us. This landing site had to evolve and repurpose itself rather rapidly to meet the needs of freelancers who still were in hot pursuit of their passions and creative ideas in a brand new world, albeit with a distinct lack of the old noise and a freshly heaped helping of introspection and uncertainty.

But in these moments, you give in to panic and let it go before finding the resolve to carry on. I followed that through and found only positivity in the context and rejected as much as was ethical “we can’t do it.” This resilience helped me to reclaim a small cupboard in the bedroom and call it a studio. This was rather bold, as any music studio I’d ever been in was much more of a luxurious affair. Mine was tiny. Where there was a clothes rail formerly a resting place for winter coats, now hung small fairy lights. Foam tiles covered up the chips in the wall and a second hand chair only just fit in the eBay constructed space.  It was safe, but charged. I started to call it a “nest” when I was learning how to online workshops and let that idea linger as I carried on making music and sharing songwriting ideas to my students, participants and mentees in all of the workshop settings I was taking part in online.

The nature of this nest was electrical, wirey, cosy and soft. A guitar could fit at a diagonal angle and only if the internet connection was wired would there be enough bandwidth for a successful Zoom session of only 5 or 6 internet connection warnings. It was the most remote place to be in that bust crossroads location of Glasgow’s Southside.

In many of the breaks from online sessions where remaining on screen was one of the few options, I happened to accidentally come across the UHI MATE programme as an opportunity after a scroll on the Creative Scotland Opportunities Page. (Old freelance habits, even in COVID, die hard). MATE was advertised – the opportunity to work on a radical, ecologically centred programme from the comfort of my wee nest studio seemed brilliant. It aligned with much of my immediate context, which at the time I had not yet named but felt was very much alive within me.  I applied, I spoke to Simon and played him a song from my album which I couldn’t release live. Music and its place changed. Its environment had radically distorted. I got in a few weeks later, I celebrated with a couple of tears and a smile and then went back to another online session. There was a new path that would not have been found if it weren’t for the need to nest within the pandemic.

The course began in earnest – from making sense of my autobiographical Celtic Roots and literal routes across the Atlantic arc; to making sense of the spaces, places and people that bring about musical creations; from the online collaboration creating a new piece in groups in celebration of Community Land Scotland, to the making of a soundscape and delving into the ideas of Raymond Murray Schafer. The cohort and I this time around all had the limitations beset upon us in common and all were making the most of this collective nesting site we had all landed in. The modules were diverse and creatively demanding - the challenges were bold and we relied a lot on each other as peers to get though each task by collectively navigating the heightened online realm.

The experience of the course is extremely fluid and suits learners who are happy to embrace the space to independently embrace each challenge - there is plenty of content to embody and employ in your local context and the key is to find ways to make relevant information and apply it to the spaces you nest in to fully embrace the ethos of the programme. The course leaders are equipped for online delivery. All tutors are knowledgeable of the various software needed to run the sessions smoothly. It also inspired me to do my own further research into the context and become even more technically savvy – how does technology and music intertwine? It does hugely nowadays! My understanding of that particular musical space increased through the countless hours of YouTubing I did to bolster the information and practical experiments and tasks we did. The culmination of the modules in the initial semesters lead to the Final Project in the last semester. My project was called “The Nature of Nesting.”

The Nature of Nesting is a project in three stages. These stages are: a 10 track album “Nest” which I composed directly in response to bird nests, a series of workshops and a community event with inclusive music and dance organisation, Paragon Music. They are a Glasgow based organisation that I have been working with recently who provide opportunities for disabled people or people with additional support needs and so it felt important to include them in this exploration. I believe we function in nesting. We use the skills of nesting and engage in the practicalities of nesting every day using our own unique bodies and our individual physical landscapes to map out and embrace the commonalities that we all share. I was invested in researching and celebrating eight excellent nest builders local to Scotland and Iceland - countries that were identified as literal places of nests to me. The first stage; the compositional process, began in these spaces, where recordings were made of bird song as they and their nesting behaviours were observed. The collection of recordings offered a soundscape in which to enter into and respond to directly through experimental compositions. I investigated the sustainability of living in and migrating between the two countries which developed ideas towards personal nest dwelling, building and fleeing behaviours. This enabled an exploration into connotations of safety, care and beauty – the three words that carried the project throughout its three stages and inspired the creative process.

The birds and nests I studied in Scotland and Iceland were:

I spent time researching how each of these birds design their nest, gather materials local to their environments and how they then weave them together. Eventually, this allowed for a shift in my compositional process – realising that the music I was making in response to the nests was not from a distance, looking up it, but from the inside of the nest looking out. 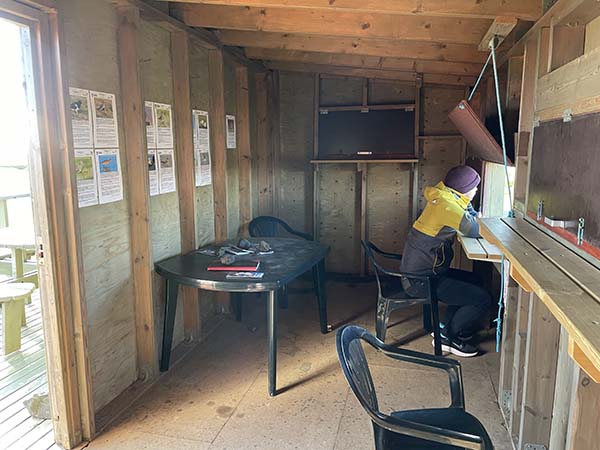 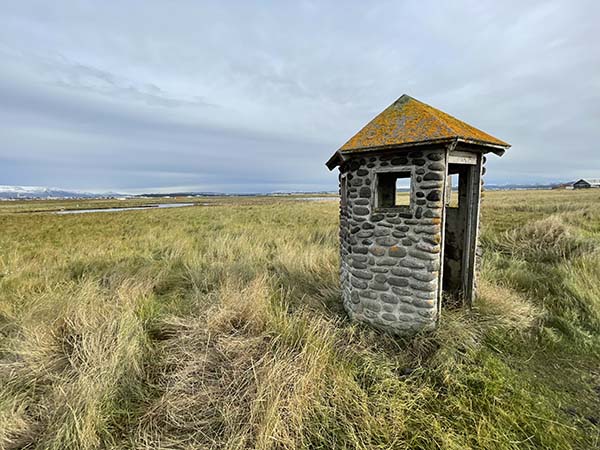 This notion was first brought into sharp focus as I uncovered an illustration that my Mum Emma drew of a photograph of me many years ago as a toddler sitting crossed legged and grinning within a speckled white, plastic washing up basket on the kitchen floor. Reading into this image a definition of nesting specific to this project was born: 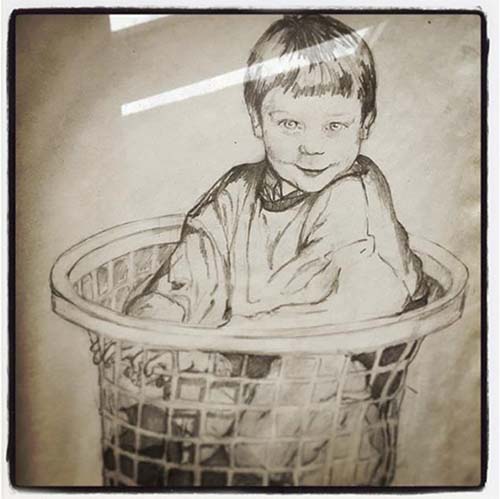 It is safe but charged space, built from local materials and crafted with care. It is a site for the miraculous and the dangerous, the beautiful and the tragic elements of birth, growth, decay and death. It is artful awareness, alertness and liveness. It relies on and encompasses different competencies from each contributor and celebrates quirks of all shapes and sizes.

The 10 songs offer an insight into the feel of the nests they respond to; their building structures and locations in Scotland and Iceland, as well as carrying an essence of the sounds from their sites. The process was impulsive and reflective, rooted in a desire to create a world of sound that was simultaneously bold and unique, whilst continuously engaging with and responding to the enquiry: What is the nature of nesting?

The album acted as a provocation for a series of workshops with Paragon M3 who ‘mapped out’ and embraced the nature of their own nests through movement, responding to the music. This process included interviews with the dancers where they described the making process, offered their own personal definition of nests and how they relate to them. A week tomorrow, the dancers will have performed the culmination of their creative explorations, with a 10 minute contemporary piece called “Nest” that premiered at GoDance 2022 at the Theatre Royal in Glasgow.

Stage 3: The Community Event
Here is one of the final rehearsals before the performance at GoDance. In this video you will see the dancers explore my enquiry ‘’What is the nature of nesting?’’ to several of the tracks on the album:
LINK: https://www.youtube.com/watch?v=Du4lOlrGztA

Stage 4: The Performance:
Here is the final performance:

I am so thrilled to have given myself the chance to coorie in and take advantage of my evolving space by doing this programme. Although it was filled with a distinct lack of the old noise and a freshly heaped helping of introspection, it birthed something creative, new, technologically sound and powerful which I know will encourage future study. As a final offer, here is the link to the album: https://soundcloud.com/zacscottmusic/sets/nest. As you listen to these tracks, I would like to invite you to meditate on what the nature of your nest is. What is your safe but charged space? How have you built it? How do you nest?